What Is Non-Point Source Pollution? 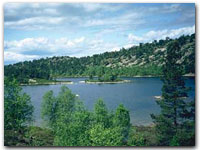 Nonpoint Source Pollution is transported by the storm water system or other surface water flows to local streams and bays. In contrast, a particular ongoing discharge from a wastewater plant or industrial facility is considered a "point source" of water pollution.

Where Does Nonpoint Source Pollution Go?

In northern Santa Clara County, nonpoint source pollutants flow into local creeks and streams, and eventually flow into south San Francisco Bay. Pollutants entering creeks and streams in the southern portion of the county ultimately flow to the Pajaro River and to Monterey Bay. Some of these pollutants, such as heavy metals and organic compounds, can concentrate to levels that are toxic to aquatic life, and contribute to significant environmental stress on streams and bays. These pollutants pose a serious problem for fish and wildlife dependent on Santa Clara County waterways, and for people who live and work near polluted streams or baylands. Nonpoint source pollutants may also infiltrate into the ground and contaminate the groundwater basin, which provides about half of the County's water supply. Pollutants can also contaminate the sediments that accumulate in flood control facilities, thus increasing maintenance and disposal costs.​​​​​